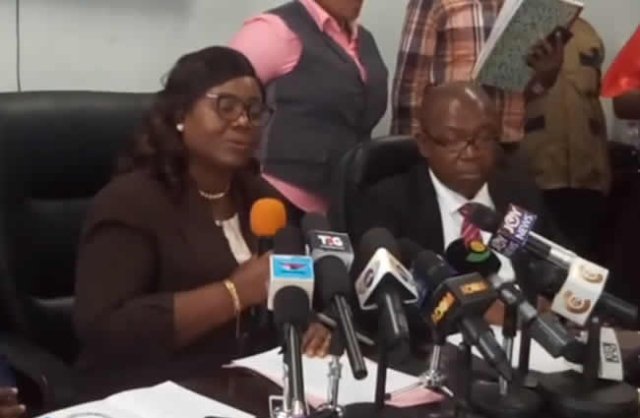 Under-pressure CID boss Maame Yaa Tiwaa Addo-Danquah has said she was misunderstood when she announced three kidnapped girls have been located.

The CID Director-General told Accra-based Atinka TV, she ‘wanted to give the families hope’ by that announcement, conceding, the location of the girls remains unknown.

That ‘we know where the girls are’ and “they are safe…very soon they will be brought back home” comment on April 4, sparked fresh pressure on the criminal investigations body to produce the three girls from Takoradi in the Western region kidnapped at different times since August 2018.

The family of one of the victims, 18-year old Ruth Love Quayson, cast doubt on the CID boss’ announcement.

Rebecca Quayson, a sister to the victim, said Tiwaa Addo-Danquah made no such revelation to her mother although they had spoken a day before her press conference.

“I don’t believe”, she said, explaining only a ‘face to face’ encounter will be sufficient.

The Commissioner of Police Maame Tiwaa Addo-Danquah has been criticised not only by her former boss Bright Oduro but also the Attorney-General Gloria Akuffo who said the comment was regrettable and could endanger the lives of the girls.

The CID boss who could be the next Inspector-General of Police feels her comments have been misinterpreted. ‘Maybe people did not understand me well’ she said in Twi, a local language.

The opposition NDC has announced it is collecting signatures calling for the CID boss’ sacking.