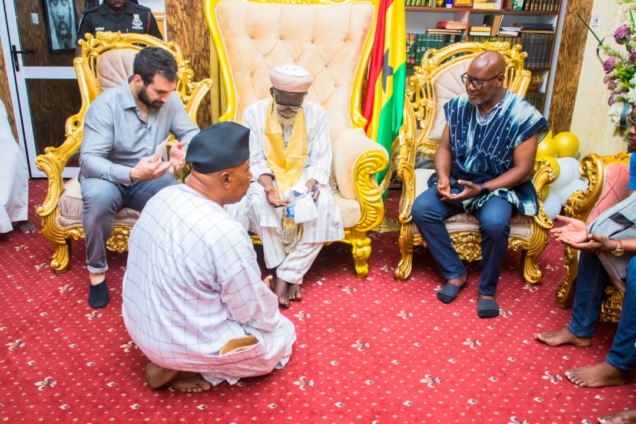 KGL Group has presented assorted items to the national Chief Imam, Sheikh Osman Nuhu Sharubutu, in support of this year’s Ramadan activities and to mark his 103rd birthday.

The items include cartons of bottled water, cartons of Malta Guinness, gallons of cooking oil, bags of rice, and a white sheep.

The Group also presented an undisclosed amount of money to the national Chief Imam.

Led by Director of KGL Technology Ltd, Ken Mpare and Chief Executive Officer of Keed Ghana Limited, Christian Salamouni, subsidiaries of the Group and other management members extended their greetings and wishes on behalf of the Executive Chairman of the KGL Group, Mr. Alex Dadey.

The delegation, in a brief address extolled the many roles the Chief Imam continues to play in Ghana’s socio-economic settings and peace-building efforts.

“KGL Group has noted with great admiration the influential role your eminence plays in our society as a whole. We deem this occasion necessary as we strive to make significant contribution into our Muslim communities, and in fact, plan to make this gesture an annual affair by the Grace of Allah”.

Receiving the items, Sheikh Sharubutu expressed his heartfelt appreciation to Mr. Alex Dadey and the KGL Group for their visit and generosity.

He offered prayers to the entire organisation and thanked Mr. Dadey specifically, for all he has been doing over the past few years.

The Group, since its establishment has significantly contributed to the revenue mobilization efforts of government, supported social intervention programs, charity organisations, and sports development in the country.

Together with its subsidiaries, the KGL Group has been at the forefront in supporting the Government of Ghana to successfully implement its flagship policy of digitalisation and has remained a world-class brand and one of the leading private sector company’s in Africa.