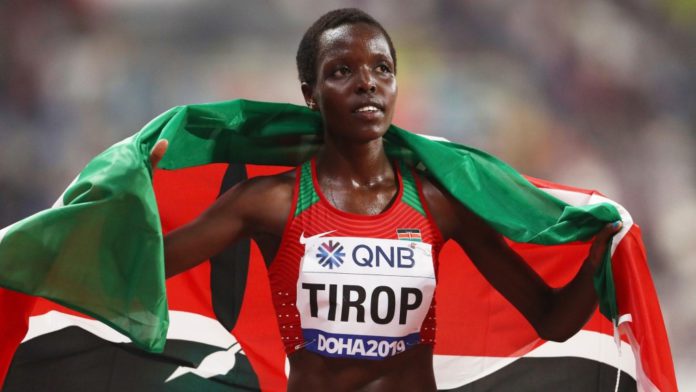 The husband of Kenya’s top athlete, Agnes Tirop, has been arrested in connection with her murder.

The 25-year-old Tirop, who represented the country in the 5,000m women’s race during the Tokyo Olympics, was found dead on Wednesday, October 13.

The lifeless body of the two-time world championships bronze medalist was found with stab wounds on the neck in her house in Iten, Elgeyo Marakwet County.

Her family revealed that their daughter was in a strained relationship with the suspect, Ibrahim Rotich, before her untimely death.

Tirop’s car, which was parked outside the home, had its windscreen and windows smashed, which could indicate a domestic dispute before she was killed, police said.

According to the Directorate of Criminal Investigations (DCI), Tirop’s husband who is the prime suspect in the incident was arrested Thursday evening in Mombasa and is set to be arraigned in court.

“The prime suspect in the gruesome murder of 25-year old world 5000m record holder Tirop, has been arrested. Ibrahim Rotich who was in a relationship with the athlete was arrested in Changamwe, Mombasa County as he tried to flee to a neighboring country to evade justice,” read a statement from DCI.

“The suspect is currently being grilled by detectives at Changamwe Police Station for more details into the murder, before being arraigned court to answer to murder charges.” the statement continued.

Meanwhile, Athletics Kenya has suspended all athletics events in the country for two weeks in honour of Tirop.