Highlife singer, Kumi Guitar, says it will be apt if Ghanaians vote for another political party apart from the two main political parties, the ruling New Patriotic Party and the opposition National Democratic Congress.

I think its okay with the two leading parties. There should be someone new. They say the same things and we go through that over and over, Kumi Guitar said in an interview on Asempa FM‘s weekend entertainment show dubbed Tête-à-Tête.

According to him, although no party will be accepted by the whole majority, Ghanaians should choose another leader.

Someone else must be tried though no party candidate can satisfy everybody. A section will be fine and a section wouldn’t.

Some will win jobs others will lose, its about peace and fulfilling manifestos. He who doesn’t perform well, they can be taken out through elections, he said. 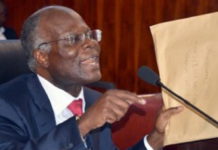