Popular Kumawood actor, Joseph Osei, known in the industry as Wayoosi, has opened up on an unusual decision he took to avoid facing punishment in an overseas country.

Wayoosi disclosed that he was forced to drink his own urine, to avoid facing sanitation sanctions in America.

The actor relocated to America after he bounced back from a near-fatal kidney failure five years ago.

In a latest interview, he disclosed that while on his runs in the State, he felt the urge to urinate, but he could not sight any restroom.

Consequently, Wayoosi continued that he was forced to urinate inside a disposable rubber, with the intention of emptying it at the next available restroom.

However, along the line, he, and some other persons in his car, were stopped for security check – he suspects the reason is that ‘black groups’ have been stereotyped in the country.

During the search, he said the security officer raised concerns about the content of the polythene, and he lied that it was medicine.

Still unconvinced with his response, Wayoosi said the officer ordered him to hand over, which he obeyed and it was then the officer found out it was urine.

To avoid doubts, the celebrated actor said he was forced to drink his urine, after which he explained to the officer that it was a prescription by his doctor.

He made the claims to buttress his point that the system abroad works, unlike this part of the world. 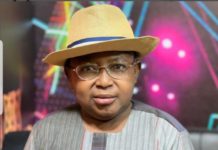 Check out latest photos of Wayoosi after defeating kidney disease