Actress Beverly Afaglo has spoken for the first time after fire razed down her house leaving her with none of her belongings to recover on Tuesday dawn.

The actress took to social media to share videos and photos of the completely burnt house that had no casualties at the time the inferno sparked.

Speaking on Hitz FM’s Daybreak Hitz show on Tuesday, the actress confirmed the unfortunate incident, adding that she retrieved none of her valuables, not even her underwear.

Additionally, she recounted many valuables she had in the house including her mother’s photo album, wardrobe, perfumes and shoes among other expensive items.

The actress, who is married to Eugene Baah, popularly known as Choirmaster, a member of Hiplife group Praye, mentioned plainly that her house wasn’t insured, tagging the unfortunate happening as an eye opener to her.

It’s my own house and it wasn’t insured… it is a lesson to me… I had no plans about that…nothing…, she told Andy Dosty.

According to her, she had to spend the night with her sister together with her mother and children.

I slept in my sister’s house with my children and my mum. There were lots of valuables that I can’t quantify… I feel sorry for my mum for her lifetime memories. You know our mothers love to carry their old photos of when they got married.

She has a full room of clothes. You don’t wanna see how my shoe racks, perfumes, my things that I sell because I stock some in my house… I have waist trainers, slimming coffee and pills…, she said.

She explained that she received the emergency call late saying: If my househelp had called me earlier, I would have told her to carry some things out for me but nothing…

The Aloevera actress stressed on the need for government to gear up the Fire Service personnel after they took over 40 minutes to douse the flames which were engulfing the house though they arrived on time.

For citizens, who politicise everything, she said it’s about time people sit up for their rights.

We should prioritise certain things and stop that misplaced priorities… We should put the unimportant things aside… until it happens to you, you will never understand it. We should all talk about these things..

How can they come with a generator that wouldn’t start?… How can a team come and wouldn’t know what to do? Over 40 minutes they were standing there… they said the smoke was just too much…

It was a lame man who advised them on how to operate their third vehicle… I don’t even have panty to wear.

I need to start building and I need a place to stay… I am comfortable in my sister’s house but there is nothing having your own space for your children, she climaxed the interview.

Meanwhile, many celebrities and her followers, all commiserated with her and urged her to hope for better days. Some have equally promised to provide help to rebuild her life.

For now, the cause of the fire has not been made known by the Ghana National Fire Service. 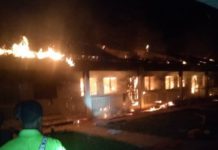 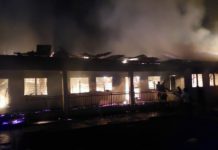 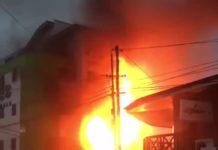