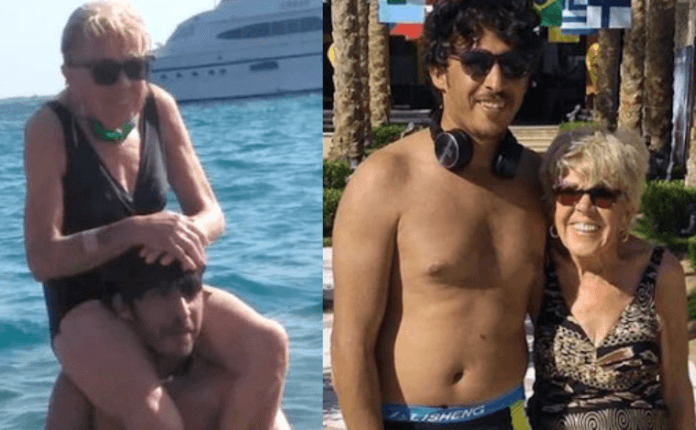 Iris Jones, the 80-year-old British pensioner who is planning to marry her 35-year-old Egyptian toyboy despite the age difference between them, has opened up about their sex life.

The woman, who flew all the way down to Egypt from the United Kingdom (UK) to see her lover Mohamed Ahmed Irbriham in November 2019, was a guest on This Morning show.

On the show, Ms. Iris left presenters Holly Willoughby and Phillip Schofield in stitches as she shared her love story as well as her first sexual encounter with her toyboy.

Iris, who previosly said her toyboy isn’t after her money claimed that she “felt like a virgin again” before going further.

When asked about their first night together, the 80-year-old pensioner said: “It was very rough.” She then continued: “Nobody’s been near me for 35 years, I felt like a virgin again.

“We used a whole tube of KY jelly.”

While the comment left Holly and Phillip laughing out loud. Iris added: “I couldn’t walk the next day, I felt like I’d been riding a horse.”

In a previous interview, Iris and her lover Mohamed disclosed how they almost got married at the British Embassy in Cairo after only four days together. But the wedding couldn’t take place as she didn’t travel with her divorce papers.

Iris is back in the UK, but she’s expected to fly back to Egypt with her divorce papers to wed her toyboy later this year.