Rev. Isaac Owusu Bempah says he is no longer having a close relationship with President Nana Addo Dankwa Akufo-Addo because the president is no longer listening to God.

Citing the stories of Saul, Samuel and David in the Holy Bible as instances, the man of God said the New Patriotic Party (NPP) leader has turned away from God.

The head of Glorious Word Power Ministry International explained that, the “Nana Addo” he knew before is no longer the man ruling the country because he has become disobedient like Saul in the Bible.

According to Owusu Bempa, God anointed President Akufo-Addo to lead the country to the promised land, but he is rather focusing on the opposite.

The Nation’s Prophet, as he is affectionately called, said the hardships in the country continue to scale up because the First Man has surrounded himself with people who aren’t privy to truth and transparency.

The pastor made these claims in an interview with RTV on their YouTube Channel.

“God asked Samuel to anoint Saul as president. But when Saul came to power, things didn’t go well. Saul was disobedient and was not listening to God to the extent that Samuel moved away from him and God asked Samuel to never pray for Saul.

“The heart he had before we voted for him has changed. He is no longer listening to God. And now people don’t pray for him. You can liken his presidency to Saul. Saul was doing what he likes until God took the power from him and gave it to David,” the man of God said.

Talking further, Rev Owusu Bempa said President Akufo-Addo has hardened his heart away from God and that equally forms part of the hardships Ghanaians are facing today.

“The things I saw about Akufo-Addo and how he should have ruled, that is not what is happening now. His first four years, everything was okay, and why did they have to go to IMF? He queried.

“I think he is not listening to anyone again. It might be the people around him. I don’t go to Nana Addo again. The Nana Addo I knew is no more. I don’t have any problem with him, but there should be a lot of prayers for him. If God isn’t part of the ruling process, it won’t work,” he added.

Meanwhile, preaching to his congregation on July 17, 2022, Rev Owusu Bempa touched on the 2024 general election.

He told the congregants that Ghanaians have already voted for the next president in the spiritual realm, and it is only yet to manifest in the next two years.

According to him, God is looking for a man who has a genuine heart to lead the country.

“Whoever shall be chosen as president on my altar will eventually be. In 2024, the person who will win the national election, we will be the ones to decide. Ghanaians will use their thumb to decide, but I am saying we will determine it in this church.

“Ghanaians are done voting. God is looking for a man who has a genuine heart. Just as it’s written in the book of Ezekiel. It keeps changing, but I am still watching.”

Speaking to his church members, Rev Owusu Bempa said hardships in the economy do not determine who will become the next leader, otherwise the New Patriotic Party (NPP) would have won the 2008 elections.

“People say Ghana is hard, but spiritually, that doesn’t decide who wins election. If that were the case, in 2008, NPP would have won hands down. Why did we go for first round and second round and thereafter things overturned? In the first round NPP was leading but at Tain, NDC won after the second round.”

“I will declare the winner the last day before election. I made a list of those who will win in the NPP delegates conference. Likewise, I will do the same thing when it’s time for NDC’s election,” he climaxed.

Meanwhile, in September 2021, Reverend Owusu Bempa said God has taken the power from the elephant (which symbolises the NPP) and has given it to another candidate.

God has taken the power and keys from the elephant with the tail of the serpent years after crowning the creature as king over Ghana, he said. 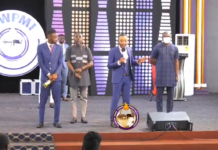 Hot video: Apologise to prophets or face my wrath – Owusu Bempah to Otabil