A South African house help landed in hot waters when she was exposed for stealing over a dozen of her boss’ panties.

A video, widely circulated on social media, captured the moment the unidentified young lady was forced to remove the over 17 panties.

Some persons in the background could be heard in an angry tone ordering her to remove the pants one after the other.

The house help, who was wallowing in embarrassment, hesitantly obeyed the instructions, a situation which attracted more insults.

She started removing the underwear, before reaching the panties of different shapes and colours.

It is unclear how she was caught, but from the video, she was not even given an opportunity to defend herself.

Househelp, three others arrested in connection with banker’s murder 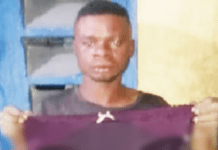