Three students at the Nobekaw Junior High School (JHS) in the Asunafo South District of the Brong-Ahafo Region escaped death narrowly when part of a dilapidated wooden bridge stretching over the Tano River in the area collapsed last Wednesday.
The students, Abass Seidu, 16, Ochere Ebenezer, 16 and Enoch Antwi, 15 were returning from school whiles Madam Afia Grace was going for maternity at Nobekaw in the Asunafo South District when the incident occurred.
But fortunately, the two of the three students and the pregnant woman managed to swim out of the river and saved their colleague who has no swimming experience.
The students, Abass Seidu,16, Ochere Ebenezer,16 and Enoch Antwi,15 were returning from Nobekaw, in the Asunafo South District where they attend school, to Kwakunyuma near Mehame in the Asutifi South District.
The collapse of the bridge has halted socio-economic activities at Kwakunyuma and Nobekaw and their surrounding villages since residents from the two districts have been crossing the river daily to transact businesses.
Teachers and students who have been crossing the bridge to school have since Wednesday, July 12, 2017 not been able to go to school.
The predominantly subsistence farmers, growing crops such as cocoa, plantain, maize, yam, rice and vegetables cannot transport their produce for sale in the major markets in the area.
It has therefore become a must for the residents to travel to Goaso in the Asunafo District to have access to social amenities such as health facilities, mobile phone services and sell their produce at a great cost.

Incident
On that fateful day, the three students who were returning to Kwakunyuma after school were caught up in the middle of the river when the dilapidated wooden bridge finally collapsed at about 3pm.
Residents in the area have been using the bridge which has been in a deplorable state for so many years now, but the situation worsened within last month when the area experienced series of torrential rainfalls leading to the overflow of the river.
More than eight communities in the area have been using the wooden bridge linking the two districts over the years.
Kwakunyunma and its surrounding communities have been hit hard because of the absence of social amenities in the area.
Means of transport
As a stop gap, A-23-year old farmer, Solomon Ozoro has managed to acquire a canoe to carry the people from one point to another at the cost of GHc5 per person and his or her load.
The people are still sitting on the time bomb because part of the bridge currently being used after the canoe has taken to a point is weak and can also collapse at any time while it would be very difficult to access health care in an emergency.
Asutifi South DCE’s visit
After visiting the area to assess the situation, the District Chief Executive (DCE) for Asutifi South, Mr Robert Dwomoh Mensah, expressed worry over the situation and called on the central government to come to the aid of the assembly by constructing a proper bridge to connect the two communities and its environs.
He pleaded with the Ministry of Roads and Highways to consider the plight of the people and add the district to the beneficiaries of the bridges to be constructed under an agreement between Ghana and China signed when the Vice President, Alhaji Dr Mahamudu Bawumia visited China recently. 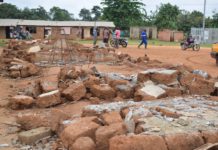 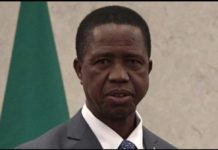 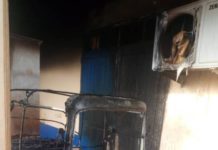