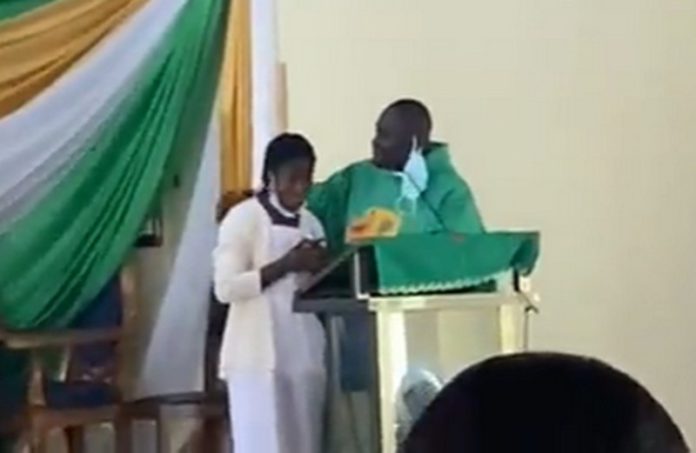 Acting on the advice of the Ghana Tertiary Education Commission, authorities of St. Monica’s College of Education have lodged a case of sexual assault against the embattled Anglican priest who kissed students of the school.

Rev. Father Balthazar Obeng Larbi kissed three female students of the school on the lips during a Sunday Mass Service.

His conduct has since received wild public condemnation with calls for strict sanctions against the man who has been working in the past five-years as School Chaplain and Lawyer.

He has since apologised for his conduct.

In an apology letter addressed to the Internal Province of the Ghana Anglican Communion, he prayed for forgiveness from the affected students and their families, the Bishop of the Anglican Church, St. Monica College of Education, and the Church.

He said his action was to “add a human touch” to appreciate Level 300 students who doubled as members of the school’s Chaplaincy Board who performed extraordinarily well and had been called for their Off­ Campus Teaching Practice.

But school authorities, led by the Acting Principal Venerable, Dr Okyere Korankye, have lodged a complaint with the Mampong Divisional Police Command.

It comes as the Anglican Church’s five-member committee tasked to investigate the conduct of Rev Fr. Larbi starts its work next Monday.

He tells Joynews the embattled priest has been invited by the police for questioning.

Rev. Father Larbi is expected to present himself for questioning later Friday.