The Medical Superintendent at the Shai – Osudoku Hospital, Dr Kennedy Tettey Coffie Brightson, has debunked claims that menstruating through the eyes and palm are associated with spiritual beliefs.

According to him, it is medically normal to menstruate through the eyes and palm.

Speaking in an interview, the doctor explained that the endometrium tissue is responsible for menstruation which is made up in the womb of a mother.

The endometrium tissue joins the tissue responsible for making the eyes and the palm making blood pour through them.

“There could be a biological or a genetic error and part of that tissue could join the tissues that are responsible for making your palm making your eye menstruate,” he explained on GTV.

The Medical Superintendent, however, stated that some people have refused to accept the scientific phenomenon because it “beats our understanding.”

“It is not Juju. The unfortunate thing is that our part of the world, we refuse to accept scientific phenomena so whatever beats our understanding as Ghanaians then we attribute it to divinity so there is a God interplay,” he stated.

He added that some people damage their eyes in order to treat this menstruate occurrence, which is a travesty.

“So, before they come to the hospital they go through all manner of herbal and many treatments so they come too late when the eyes are damaged. They are pouring things unto the eye. They are saying that Satan is cutting their eyes so that they bleed,” he stated. 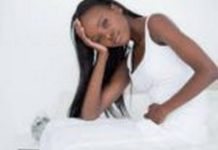