Hearts of Oak boss, Kosta Papic, has admitted that his side lacks killer instincts in the ongoing Ghana Premier League.

The Phobians were hoping to maintain their perfect run of the season but were held to a 1-1 draw against Elmina Sharks at the Ndoum Sports Complex on Sunday.

The stalemate leaves Hearts of Oak at the 5th position with 12 points after eight matches played.

“No, not good enough. But you know that five players, who are key on the pitch, today were not completely in the game. It’s very difficult to win the match (this way),” he said after the game.

“But I said it’s going to happen, and it has happened. One day we play fantastic and another day we are like this.

“When we are consistent to play the football we want, that case we can discuss properly (the title),” he concluded.

Hearts of Oak will next play Eleven Wonders in their next game on Friday in the matchday 9 games. 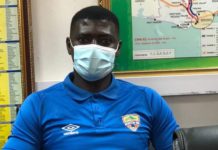