A new report by Policy Think Tank, IMANI Center for Policy and Education, has showed that the Ghana Revenue Authority’s (GRA’s) failure to collect taxes resulted in the country directly losing ¢9.13 billion from 2015 to 2020.

According to the report titled ‘Fiscal Recklessness Index 2020 Project’, the GRA failed to enforce its main obligation of tax compliance, resulting in financial irregularities.

It explained that the cash irregularities were largely driven by unapproved disbursement of funds, unapproved transfer of funds, and delays in the lodgment of public funds into the respective public accounts.

Meanwhile, the report further revealed that the Ministry of Finance and its subsidiary agencies such as the GRA topped the list of Ministries, Departments and Agencies as the most fiscally reckless on an annual basis and also over the six year period between 2015 and 2020.

“For example, the Ministry of Finance had the highest combined Fiscal Recklessness Score (FRS) of 0.8797. Two key irregularities account for the trend observed at the Finance Ministry” the report captured pointing out that tax irregularities and cash irregularities were the main causes. 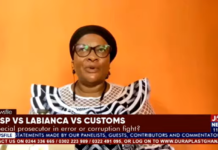