Great Olympics coach, Annor Walker, has revealed he was saddened by Kotoko’s decision to sack their head coach, Maxwell Konadu.

Konadu, 48, was shown the exit on Friday morning following their 1-0 loss to Great Olympics at the Ara Sports Stadium.

Speaking to the press after their 1-0 win against WAFA on Sunday, the veteran trainer admitted Kotoko played well against his side despite the defeat and would have been prudent to stick to Konadu.

“I was sad when Maxwell Konadu was fired. They didn’t play bad against us but the coach has their own reasons but I wasn’t happy with Maxwell’s exit,” he added.

Meanwhile, Coach Walker has charged local coaches to up their game if they want to keep their jobs. 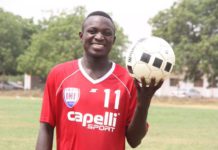