A governance and accountability expert says until Ghana strengthens its accountability architecture, needless judgment debts, threats of demonstrations, controversial car loans discussions, civil unrest and general weaknesses in a democracy are to be expected.

Dr Valentin Mensah, quoting Alexis de Tocqueville, a popular French aristocrat who produced the seminal work on Democracy in America, insists, except God, there is no government or authority on earth that can function properly without oversight.

Sadly, he noted, Ghana has for years practised a democracy without effective oversight and accountability regime, with members of the Institute of Chartered Accountants Ghana (ICAG), Civil Society Groups looking on without active participation while politicians pretend to hold each other accountable and fail abysmally at it.

He was speaking at a public Corporate Governance Faculty Lecture organised by ICAG on the theme ‘Dysfunctional Executive Oversight and Accountability in Ghana.’

The Lecture was also to find out the critical role ICAG can play in holding governments accountable and strengthening the democratic regime.

Walking participants through Ghana’s constitution, Dr Mensah said governments over the years have failed to deliver on the basic, yet key, constitutional dictates that have a direct impact on the citizenry.

Quoting Articles 35 (8) and 36 which talk about eradicating corrupt practices, abuse of power, and improving the economy to maximize the welfare of citizens respectively, the public financial management expert and board member of the Graphic Communications Group said the state of affairs as highlighted in the 2021 budget, as well as reports from transparency international, do not show “we are effectively implementing the political and economic objectives of the Constitution for eradicating corruption or developing the economy to make the citizens happy.

“The governments of UK, US are securing the welfare of their citizens and making them happy that is why a lot of us want to migrate there.”

He was convinced Ghana’s failure to hold leadership accountable for their stewardship is the reason for the sad state of affairs.

Dr Mensah said while elections are important mechanisms in holding governments to account, inter-institutional oversight and accountability must be strengthened in between general elections.

He was unequivocal in his belief that Parliament and the Auditor-General have failed in holding executive accountable due to their precarious relationship.

He said the current constitution under Articles 184 and 187 (2) limits the AG in presenting audit reports to the house of Parliament without instructions from Parliament on what the two institutions can do to collectively hold the Executive to account.

He said the Public Accounts Committee, which should play the role of the audit committee and bring issues of corruption by the Executive out in the public domain, is faced with a myriad of problems including partisanship of Members of Parliament, lack of technical support and resources, late consideration and debate of Auditor-General’s report by Parliament and lack of political will or interest in the oversight function due to political culture.

In finding a solution to the oversight and accountability deficit in governance, Dr Mensah said other key actors like the CSOs and Accountants, especially must be actively involved in the process.

If accountability is left for the politicians alone, it will be like a turntable for them. They will talk well when they are in opposition but do worse when in government, he stated.

Like it happened in the Occupy Ghana and the Auditor-General case which led to a number of surcharges and refunds, the corporate governance expert said there have to be active collaborations between CSOs and the Institute of Chartered Accountants to hold duty bearers accountable.

He said National Oversight Week or Oversight Month can be instituted for duty bearers to account for every penny expended on projects of national interest as pertains in Rwanda.

He also called for a change in the political culture of Ghanaians which, sometimes is expressed in unquestioned loyalty to groups, unquestioned obedience to authority, unnecessary expenditure on rituals like funerals etc., with adverse impact on savings required for investment.

ICAG Role
The president of the Institute of Chartered Accountants Ghana, Prof Williams Atuilik, said accountants have a major role to play to ensure prudent public financial management and reduction in corruption.

He said ICAG will, henceforth, be seen to be playing a critical role in the governance process and will make appropriate recommendations to the government on best corporate governance practices.

“From the top hierarchy of corporate Ghana to the lowest, there is need for proper governance architecture, and accountants have a critical role to play in tightening fiscal management regimes,” he stated. 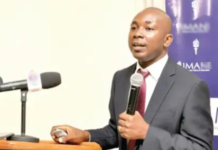 Govt should support indigenous businesses regardless of their political ties – Prof. Bokpin