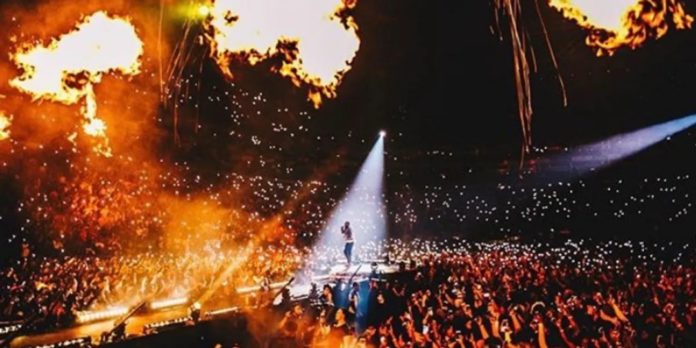 Nigerian superstar and his Ghanaian cohorts kept the city of London wide awake with their mind-blowing performances at the 02 Arena.

Tens of thousands of fans were treated to an electrifying performance Saturday night by Davido who recruited Stonebowy, Darkovibes and KiDi to join in the celebration.

At the fun-packed musical concert, Stonebwoy was the first to join the Afrobeats star on stage to perform their collaboration, Activate.

The charged crowd chanted in excitement as the duo gave their very best amid hot dance steps.

The situation of Darkovibes was not different.

The budding artiste was ‘stupefied’ when fans sang their Je M’apelle song word-for-word.

Despite it being his first time to perform at the 02 Arena, and before an august crowd of about 20,000 fans, Darkovibes did not stutter.

His performance is still on the lips of many, and he was trending number 1 on Ghana Twitter.

KiDi, however, failed to capitalize on the opportunity as he was absent, despite reservations made for him.

It is believed to be in line with rehearsals for his own concert happening at the same venue, a day after.

KiDi will perform alongside Kuami Eugene at the Indigo 02 Arena, Sunday, March 6 for their sold-out Live In Concert.

Meanwhile, Davido’s sold-out concert has put Africa on the highest map, with respect to music.

Aside Davido, very few artistes including Wizkid and Burna Boy have reached that feat. Ghanaian artistes are yet to catch up.