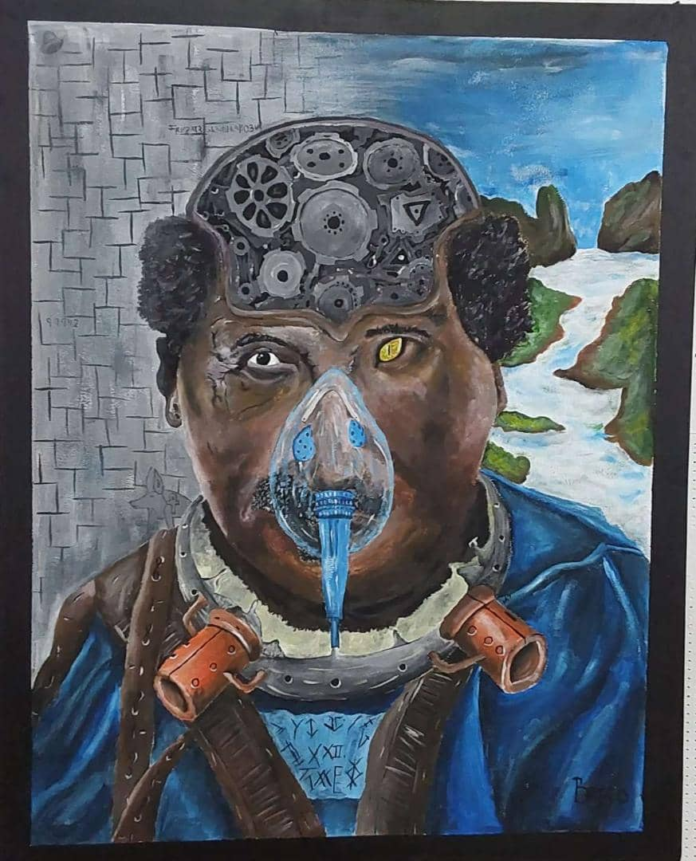 Prior to the outbreak of the COVID-19 pandemic, there had been some predictions of how the world would battle such a pandemic in various movies.

“Contagion” – a 2011 movie about a pandemic with similarities like the COVID-19 pandemic, and a 2007, mini series directed by Kinji Fukasakuare, are clear examples of such movies.

Also, there have been theories predicting that the world in the distant future would be an AI community. Movies like “Passengers,” a sci-fi romance film released in 2016; I, Robot, an American sci-fi action film directed by Alex Proyas and released in 2004; WALL-E, a 2008 American computer-animated science fiction film, produced by Pixar Animation Studios for Walt Disney Pictures and co-written and directed by Andrew Stanton, are all predictions of the future ahead.

Well, a Ghanaian artist through his artwork is also presenting his own version of how the future of the world would be like.

Will his drawing be accurate or not? Let’s explore his artwork.

This particular art piece predicting the future is titled “The Time Traveler.”

It was inspired by a dream, he said.

“It came to me as a vision. I was motivated to work on it because it was a dream. So the time traveler is a piece of art that tells how the future will be.”

The time traveler is a figure with an engine brain. It has two eyes; however, one is the eye of a cat, among other features.

“Secondly, you can see the eye of a cat, meaning human beings will adapt to modern modifications in the near future. We can also see something like an oxygen holder which I can boast about and say that I’m the one who invented such a thing, because I haven’t seen anything mobile with an oxygen holder like this before. And this oxygen holder was placed here to tell how the deforestation would result in great damages in the future,” he said.

Wilson further explained that when deforestation, etc. ravages the earth, “the oxygen holder will feed or give oxygen to humans wherever we go.”

The picture also has a “puzzled-like background” which according to Wilson, tells how the world has already been solved.

Wilson explains that “everything that’s happening now or will happen in the future has been written already.

“Biblically, we know the end is already written so everything in this world has been solved already. So that’s the rationale for one side of the background,” he noted.

The other part of the background is a painting of a depleted environment – a sea with logs floating on it, etc.

Explaining the rational for this, he noted that the human race is likely to live in a degraded environment in the near future due to the constant pollution.

“On the other side of the background, I can say due to how humans have destroyed the environment, global warming, deforestation, illegal mining and stuff, humans will meet something like this – green vegetation and stuff will no longer be there and the next human race will not meet something like; we will not have these things to show our children or our grandchildren,” Wilson added.

Will this forecast turn out to be true in a few years? Well, time would definitely tell.