According to President Akufo-Addo, this is to revamp the sector which has deteriorated over the years since colonial rule ended in Ghana.

“The British left us a functioning railway system, we didn’t look after it, and we allowed it to deteriorate. For this part of the 21st century, a major responsibility is on you, on me, my successors, to rebuild the railway infrastructure in our country,” he said.

President Akufo-Addo said this while addressing workers of the Ghana Railway Company Limited (GRCL) at the Diesel Multiple Unit workshop shed in Tema as part of his tour of the Greater Accra region.

“It is obvious that rail transport is environmentally friendly, it is efficient, it is less costly and it is generally a more intelligent way of moving people and goods than any other form of transport.

Minister for Railways Development, Joe Ghartey, also in his remarks noted that by 2023, Ghana must have a viable railway sector that will meet the transportation needs of the citizenry.

He further indicated that over 10 coaches which were to be scrapped were being reformed by the hardworking GRCL workers. 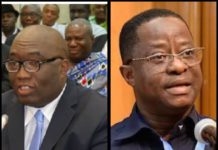