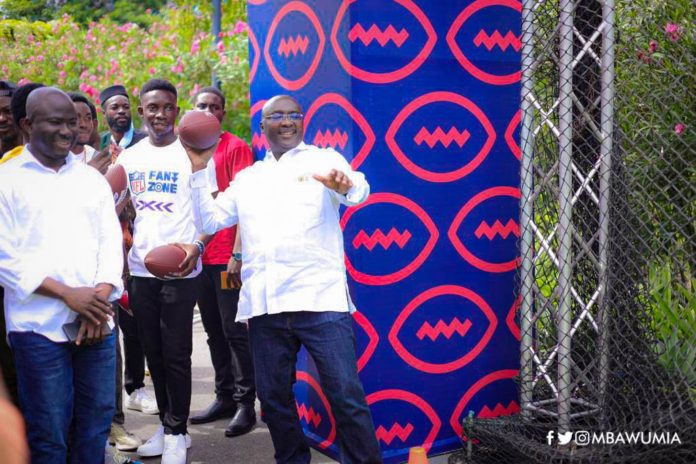 The Vice-President, Dr Mahamudu Bawumia, is optimistic Ghana will produce talents for the National Football League (NFL) in the near future.

This comes after the NFL, at an exhibition on Sunday, selected Ghana to host to unearth players into the NFL Academy.

As part of the initiative, 10 schools have been selected alongside trained teachers who will guide their students to play American Football, as extra curricular activity, in a programme dubbed NFL Flag.

These schools, after 12 weeks of training, will compete in a special tournament for an opportunity to take part in an international NFL competition in the United States.

Dr Bawumia, in a post on Facebook, said, “earlier today in Accra, I joined the National Football League (NFL) of the US, NFL legends and many young Ghanaians for an exhibition of American Football. The exhibition followed an NFL Africa Camp earlier in the week, which Ghana was selected to host, to unearth players into the NFL Academy.

“Continuing its faith in Ghana, the NFL, at the exhibition, announced it has selected 10 schools in Ghana and trained teachers from these schools this week, who will guide their students to play American Football, as extra curricular activity, in a programme dubbed NFL Flag.

“Ghana is the first country in Africa to benefit from this NFL programme, and I am excited to see the commitment of the NFL to introducing and developing American Football in Ghana, following their assurances to me when I hosted a delegation of the NFL in Accra, subsequent to a meeting between my office and the NFL in New York.

“Sports, like education, opens doors, and this investment by the NFL in Ghana will open doors for many young people, who will hopefully emerge as NFL professionals.”