The Ghana Bar Association says it is a big threat to the rule of law if members of the vigilante group who assaulted a judge and disrupted court processes are allowed to walk.

A statement released by the Association, Thursday, called on the Police to, as a matter urgency, carry out a thorough investigation by interviewing lawyers, court officials and litigants who were in court on the day  hooligans affiliated to the governing party budged into the court to free 13 Delta Force suspects standing trial for assaulting the Ashanti Region security coordinator.

The statement follows a shocking decision by a Circuit Court in Kumasi to discharge eight members of the Delta Force who were accused of causing mayhem in court, assaulting the judge Mary Sankyire and freeing suspects standing trial.

The State Attorney in Kumasi entered into a nolle prosequi partly because there was no evidence to convict the eight suspects.

According to the attorney, the police failed to do a thorough investigation on the matter and only went around arresting people on the day of the court invasion without any intelligence.

The state Attorney also indicated that neither the lawyers, police personnel on duty on the day of the attack could identify the suspects charged for invading the court.

They had no option than to file a nolle prosequi which was granted by the judge who then discharged the suspects.

The discharge of the suspects has been condemned by sections of Ghanaians, especially the minority who have accused the government of pandering to political pressure.

The Ghana Bar Association has joined in the criticisms saying it is disturbed by the turn of events but hopes it will not signal the end of the matter. 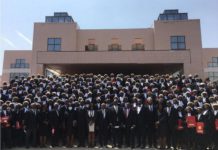