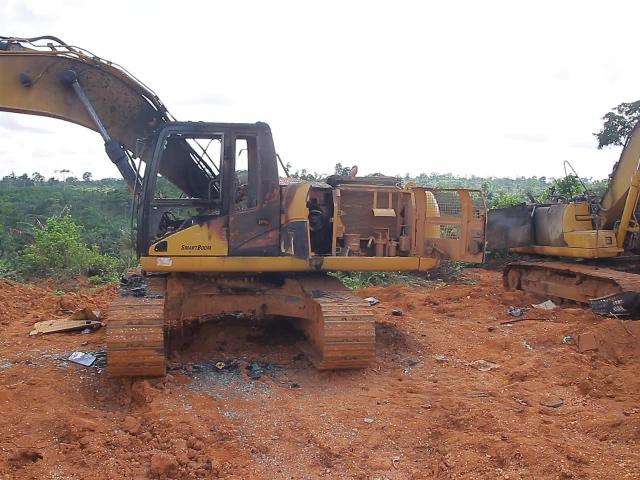 At least 20 excavators and several mining equipment have been set on fire by the military taskforce set up by government to crackdown on illegal mining in the Eastern Region.

Eight out of the number of the excavators and one bulldozer destroyed allegedly belong to the National Women’s Organiser of the ruling New Patriotic Party, (NPP) Kate Gyamfua.

The taskforce on Sunday raided some mining sites at Larbikrom, Dompem and Pamen, all in the Atiwa district.

The Dozer had been hired to reclaim degraded acres of land but was not spared by the taskforce.

The taskforce spent several hours at the mining site of the women’s leader after receiving calls from various quarters but they eventually set fire into the machines.

The team, according to some persons who claim to work on the site, allegedly beat up some of the workers and took away some alcoholic and non-alcoholic beverages kept in a fridge.

At Akyem Larbikrom and Dompem, four excavators including brand new ones each valued at 120,000 dollars were set ablaze.

Dozens of water pumping machines were all destroyed.

According to him, the taskforce could have considered the contributions of madam Gyamfua to the party and retreated on its actions.

He also added that they had adhered to all the mining laws including reclamation of degraded lands.

Meanwhile, a member of the Small Scale Miners Association in the Eastern Region, Alhaji Hussein Suronim, condemned the action of the military taskforce and explained that affected members are not illegal miners but licensed small scale miners who adhered to all the mining regulations.