Deputy Minister of Transport, Daniel Nii Kwartei Titus Glover, has called on President Akufo-Addo to, as a matter of urgency, discipline the faceless people behind the over 500 missing excavators and galamsey at large.

Mr Glover who doubles as the MP for the Tema East Constituency said he believes the Akufo-Addo led government has not given up on its passion and drive towards stopping galamsey and hence the need to act quickly.

Speaking on Adom TV Badwam, Monday, Mr Glover said he believed President Akufo-Addo was not in support of those in government who were working against his fight against galamsey.

Meanwhile, the National Communications Officer of the National Democratic Congress (NDC), Sammy Gyamfi, has served notice that officials found to be complicit in the missing excavators’ saga will face the law if the NDC comes into power.

Speaking at a press conference on the banks of River Pra at Twifo Praso in the Central Region on Sunday, Sammy Gyamfi said the excavator scandal should not be swept under the carpet.

He also on behalf of the party asked the government to account for all excavators and ammunition seized during the Stop Galamsey Campaign.

Citing figures captured in the 2020 budget presented in Parliament to support his claim, the NDC communicator said the government seized 900 excavators during the campaign. 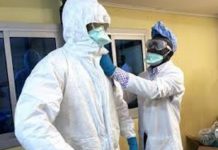