Deputy Minister for Lands and Natural Resources, George Mireku Duker, has revealed 265 mining equipment have so far been destroyed in the fight against galamsey.

According to him, 26 illegal miners have also been arrested following the launch of the fourth phase of the operation halt II.

Mr Duker, who is also the Tarkwa-Nsuaem Member of Parliament, disclosed this at a press briefing on Wednesday.

He explained the operation was conducted from December 4 to 6, 2021 within the Ankobra tributaries.

“They were found within the red zone of 100 metres of the River Ankobra, a motorbike, 22 mobile phones of illegal miners have also been handed over to the civil police at Prestea and Wassa Akropong,” he announced.

The Minister went on to commend the personnel and the Commander of the Southern belt for the result-oriented operation.

Personnel from the Ghana Armed Forces were deployed for the operation aimed at removing all persons and logistics involved in mining from water bodies.

The first phase of the operation focused on the Pra River, but with attention along with the Pra in the Central Region, and not the Western Region.

The second phase was in the Ashanti Region, with focus on the Oda River and the River Offin in both Ashanti and Central Regions.

Phase Three focused on River Ayensu and Birim in the Eastern Region. 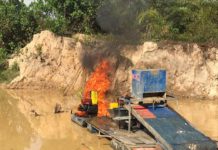