Mr Mornarh’s registration might have come as a surprise to Mr Otchere-Darko due to the fierce resistance he exhibited ahead of the exercise.

Mr Mornarh, who is the Convener of the Inter-Party Resistance Against the New Voter Register, led several protests and petitioned several personalities to stop the compilation.

The National Chairman of the People’s National Convention, prior to the take-off of the exercise, also made comments which landed him in trouble.

He was invited by the Criminal Investigations Department of the Ghana Police Service for interrogation.

Taking to Twitter, Mr Otchere-Darko quizzed why some Ghanaians have still not registered, when the protestpreneur and CEO has registered to vote, referring to Mr Monarh. 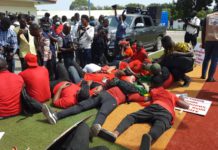