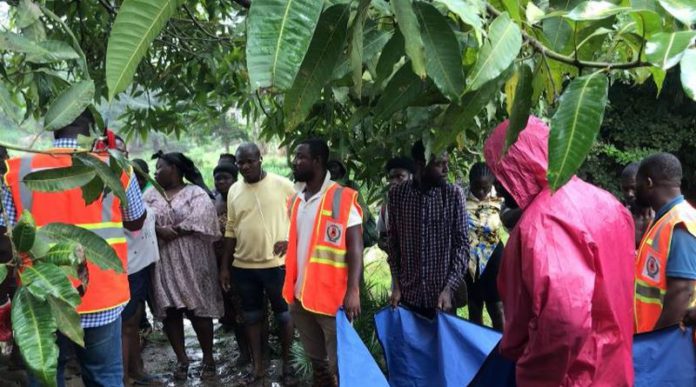 A man, believed to be in his 30s, has been found dead after allegedly drowning in the Subin River at Anwomaso-Bebre in the Ashanti Region.

The body was found Thursday morning after a night hunt to retrieve the body of the deceased.

According to eyewitnesses, the deceased,, identified as Kwadwo Mensah attempted to cross the river which had overflown its banks to his home.

They say an occupant of a nearby house cautioned him against using the path but he resisted and slipped into the river.

The deceased is alleged to have been tipsy while attempting to cross the river. Kwame Daniel is the brother-in-law of the deceased:

“I got a call around 3:00 pm yesterday that he wanted to cross the river. Someone close by told him not to. But he snubbed the person and unfortunately slipped into the River.

“My in-law was around and saw him. She shouted for help. We searched all night for him but couldn’t find the body. It was this morning that we found the body,” he said.

Lambert Aremadare was with the deceased in his last moments.

“We were with him when he came he wasn’t in the best of mood. He hadn’t eaten by then. I spoke to him and really made sure that he ate. So after eating he slept off and after some time he woke up. Nobody knew where he was going but he just said he was going home,” he said.

NADMO officials were at the scene to receive the body. Foster Agyei Tuffour is with the Oforikrom NADMO directorate:

“The body will be sent to the Police station for proper identification before we send it to the family,” he said.

Many communities in some parts of Kumasi were inundated after 10 hours of downpour on Wednesday.

Homes were submerged and commuters were left stranded in the rush hours of Wednesday.