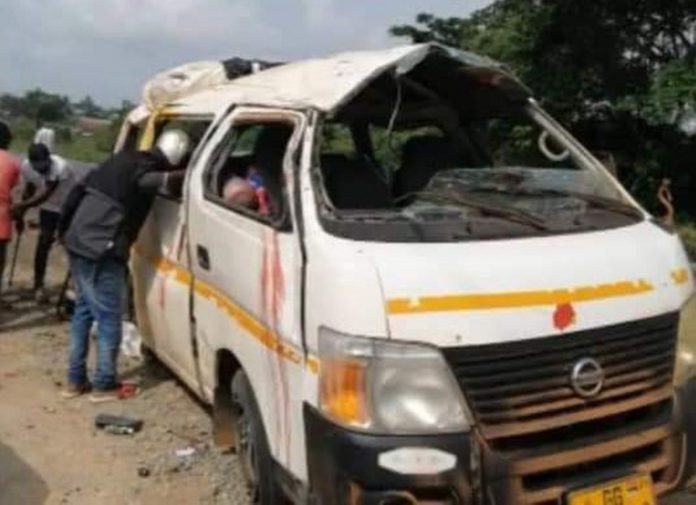 Five persons including an eight

-month-old baby have died in an accident that occurred on the Adeiso-Nsawam road in the Eastern Region.

Reports indicate the accident occurred after a Nissan bus with a registration number GG 3212-19 from New Abirem, travelling to Accra hit a pothole.

It caused the driver to lose control while the vehicle somersaulted several times while some passengers were thrown out of the window.

The New Abirem station master only identified as Nuhu narrated one of the vehicle’s tyre burst due to the speed the driver was moving.

“Five people came out from the window and hit their heads on the road and died. These five were two females and three males including the eight months old baby,” he said.

He added that “the tragic part was that when the baby came out from the window onto the road, the bus ran over the baby.”

He cried out that the driver had loaded lots of things at the back of the vehicle and on top of it, making the bus very heavy.

The driver together with two other passengers sustained minor injuries.

The driver was immediately arrested by the Nsawam Police who rushed to the scene and was taken to the station to write his statement and later granted bail after being given a medical form to attend hospital.

One woman, who sustained a minor injury,

lost her husband and baby and another man lost his wife through the accident.