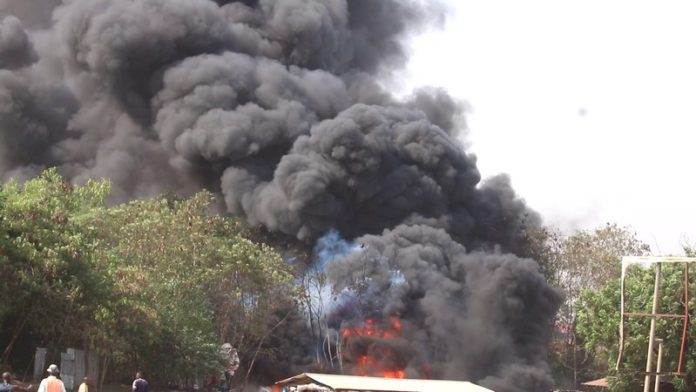 Ghana could have been thrown into another week of mourning after barely recovering from the explosion which killed at least 13 persons and flattening a part of Apeatse in the Western region.

This time, it was a fire incident close to Accra Plains Depot of Bulk Oil Storage and Transportation (BOST) at Kpone barrier Tuesday afternoon but for the Ghana National Fire Service(GNFS).

Although immediate cause of the fire is unknown, an eyewitness and a Lotto agent who only gave his name as Kwame Coach said it started from some fuel dealers’ end known locally as “Beleble”.

Narrating to Adom News, he saidwhen the fire started, it was limited to a particular spot as the dealers tried putting it out with extinguishers.

“Their effort however went to waste after one of them lifted a container with fuel. The fire immediately began spreading to some wooden structures here,” he narrated.

The agent then rushed to call a fire personnel at the depot but met him equally rushing to the scene.

“The Fire personnel told me none of the tenders was around. I suggested he placed a distress call to Tema Oil Refinery (TOR) or Ashaiman Fire station for help,” he said.

Thick dark smoke at this point could be seen metres away drawing some residents to the place.

With the first tender arriving at the scene, it drove straight close to the huge tanks and began spraying water on them as they could have exploded due to heat from the fire.

The depot with 15 tanks and total capacity of 215,000 cubic metres of fuel serves Greater Accra, parts of Eastern and Volta regions.

The second tender had the personnel fighting the blaze which at the time had destroyed a saloon car, bicycle, a tricycle, wheelbarrow and consuming anything on its way toward the tanks.

Speaking to the media, Operations Officer at Industrial Fire Command, Assistant Divisional Officer Grade One( ADO I), Paul Baidoo said they received a call around 2:30pm that BOST was on fire.

“Upon getting here, we realized that it started from the fuel dealers’ end. Since it could have spread to the tanks, we decided to fight from both ends,” he said.

Asked if there was any casualty, he responded in the negative.

On the question of threat such activities posed to the BOST depot, he said Fire Service has been warning and educating the dealers about potential fire.

“Due to the warning and education, they mostly relocate and later return. Enforcing the law by way of arrest lies with the police,”Mr. Baidoo explained.

The fire team after fighting the fire ensured that drums of fuel stored in the wooden structure were moved to a different location.

The depot is some metres away from Golf City, a golf course, high voltage pylons among facilities on the Northwestern part.  The Northeastern side has part of Community 25 and businesses aside other facilities.

The depot is also metres away from a busy international road which has dense traffic regardless of the time of the day and to the South, you have a fill station, some industries among other things which welcome you to the Kpone community as wells as a part of the industrial area with other oil depots.

Coupled with the harmattan, it is believed that the magnitude of destruction would have been indescribable had the Ghana National Fire Service failed to put out the fire within minutes.