The prosecutor in this case, Chief Inspector Peasah Birikorang, briefing the court said that the theft happened on 2nd day of May, 2021 at about 4:30 at Obugu Asante Akyem South.

The suspect is said to have unlawfully entered the room of one Madam Appiah Yeboah Elizabeth, where he stole a Tecno phone valued about GHS 850.

However, after his cover was blown, he fled the scene, leaving behind the phone which fell from his pocket.

He also on February 9, 2021 fraudulently stole maize in a rubber container, also valued about GHS 400.

The court, presided over by His Lordship Nana Atakora, in his judgment, charged the accused for attempted robbery of the phone and theft of the maize, on his own guilty plea.

He was subsequently sentenced to five years imprisonment. 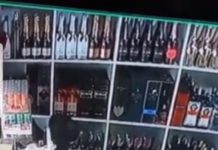