Controversial singer, Wendy Shay, is in the claws of social media users for slamming an internet site for ‘reducing’ her net worth.

Splashing a screenshot on her Twitter page, she revealed she is worth more than $1 million to $5 million as estimated by the website.

To her, the altering of her monetary value is a total disrespect and ordered for the post to be deleted with immediate effect.

However, netizens, who doubted her over GH¢ 28 million, (GH¢ 280 trillion old cedis ) claims, descended heavily on the musician for bragging about what she does not have. 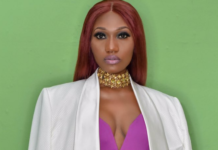