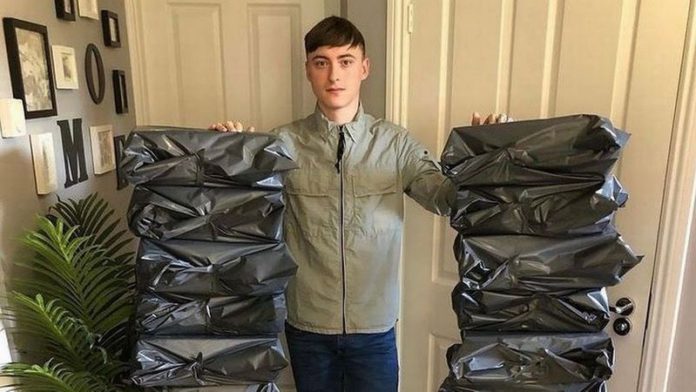 A businessman, who struggled during school and dropped out of university to follow his dream, is now operating a global trainer business so successful that he employs his own dad.

Keilan Kogut, from Pudsey in West Yorkshire, started up Adikoggz Trainer Customisation while studying for a degree at university.

But he came to a point where he had to decide whether to follow his dream or keep hitting the books on a subject he didn’t enjoy – and be skint for the next few years.

Keilan’s bet on himself paid off and he’s now sold over 4,000 pairs of trainers in countries across the world.

Among the designs on his site are the £115 “Peaky Blinders Inspired Trainers”, which have a picture of Tommy Shelby on the tongue.

Others include “Pablo Escobar Inspired” kicks and even some for die-hard football fans in team colours and with badges.

Speaking to Leeds Live, Keilan explained how he struggled at school with dyslexia and discalculia but this did not stop him from achieving academically and getting into uni.

However, once there he struggled realising that he spent all of his time studying with little money for something that he didn’t actually enjoy.

He decided that university wasn’t for him after all and that’s when he discovered his new trainer business venture.

Keilan said: “I had so many trainers under my bed which were all ruined, so one day I started cleaning them to bring life back into them rather than throwing them into landfill.”

After a while, he began doing trainers for family and friends as well as his own collection and earning money at the same time.

Keilan says he was faced with a choice whether to continue with something or loved or with his degree.

He says he hasn’t regretted his decision and that it’s transformed his life.

He said: “I believe this business has helped me grow as a person because my reading and writing skills have developed.”

The business has gotten so big that he’s now employed his own dad – who’s worked with him for two years.

Keilan said: “My dad didn’t like his job, he worked silly shifts which meant he had no time to spend with my mum or me.

“One day I just came home from university, my dad had left his job, told me to drop out and we went from there.”

The pair have even done cleans on top-end trainers costing up to £1,000.

Keilan and his dad have even got their shoes in a museum in London which be shown next in Dubai.

Keilan said: “We’ve sold to nearly every country in the world now, and it’s constantly growing and growing.

“I don’t even know how much I’m making now, I haven’t checked, but I know it’s really taken off.”

Keilan says he didn’t expect his business to take off this much, and nor did his peers with people expressing doubt in his dreams, he said people would say to him: “Why would you want to clean dirty peoples shoes,” or “Why drop out of uni.”

However he says they now see why, he said: “But now they see where I am, no one believed in me except my mum and dad.”