Ghanaian industry players united to mourn with musician Dada KD on the occasion of his mother’s one-week anniversary.

Dada KD lost his mother, Obaapanyin Hannah Boadi alias Abena Asubonteng, two weeks ago after being down with an illness. She was 85.

In preparation for her funeral, a one-week observance was held at Agona-Asamang in the Ashanti Region on Saturday, January 15.

It is in line with this course that the Ghanaian stars; Emelia Brobbey, Dada Boat, Kaakyire Kwame Appiah, Nana Acheampong and the likes were spotted at Asamang.

The musicians, among the celebrities, comforted the guests with inspiring dirge. Notable of the performances was Nana Acheampong’s.

After being missing in action for years, the veteran highlife singer joined Dada KD to perform some of his hit tracks. 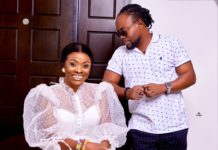