The Electoral Commission (EC) has directed the opposition National Democratic Congress (NDC) to table its proposed electoral reforms before the Interparty Advisory Committee (IPAC) for dialogue.

The Commission said it is open to suggestions and feedback to enhance the country’s electoral process but insists IPAC is the appropriate forum for such suggestions.

The directive was after the EC took delivery of the NDC’s proposals.

“We don’t deal with individual parties, and IPAC is designed to promote multi-party views, so IPAC is the right forum for such discussion.

“So we responded to their proposals and asked the party to bring it to IPAC,” it said.

The Commission further explained the decision to ask the NDC to table its suggestion before IPAC was arrived at during a top management meeting over the suggestions.

But the EC also observed that some of the suggestions captured in the NDC’s proposal go beyond its mandate.

Some of the issues the commission listed as not being part of their mandate included:

1. Specially-designated courts should be appointed exclusively for electoral disputes and offences before, during and after registration of voters and elections.

3. Provide for prior parliamentary approval for the appointment of EC members.

But the Commission says the suggestions, which have a direct nexus on their operations, would be looked at.

“The EC always wants to be the best, and so we are for anything that would enhance the electoral process.

“When the NDC finally submits its electoral reforms to IPAC, we will look at the issues holistically and decide on them.”

The commission added, “regional collation centres in our own estimations were good, and that would have been continued-nevertheless if there’s an opportunity to improve, it would be available to do so.” 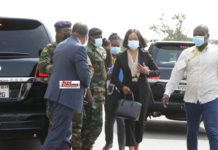