Some driver unions in the country are calling for the removal of tollbooths across the country.

They argue that, it is a waste of productivity as they spend hours in long queues to pay GHS1 and 50 pesewas.

He argued that, government will make more money putting a small levy on fuel than allowing the tollbooths on the roads.

“The fuel you will waste in the queue is more than the GH¢1 you pay at the toll booth,” the GPRTU General Secretary fumed.

Mr Abulbir was certain the government will get enough revenue to construct good roads if they consider their petition to remove all tollbooths. 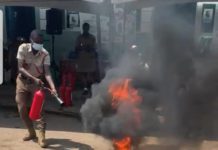 GPRTU, other transport operators to embark on strike on Thursday

Taskforce set up to halt ‘illegal increase’ in transport fares

Transport fares not up by 20% – GPRTU