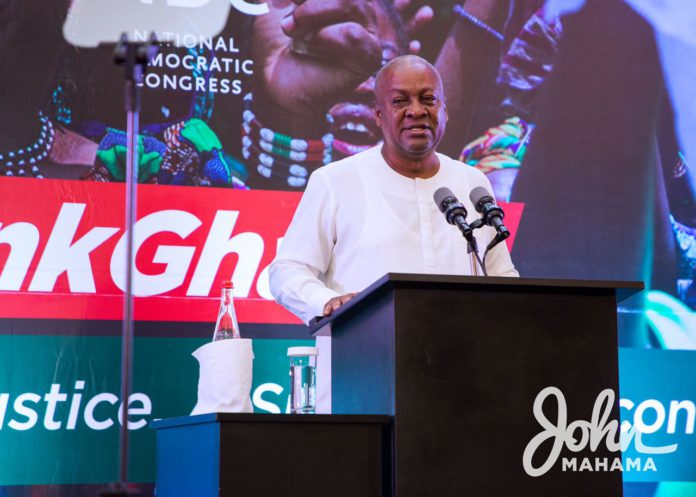 The 2020 Presidential Candidate of the opposition National Democratic Congress (NDC) has criticised the Akufo-Addo government for being unwilling to listen to the concerns of the people amidst the dire economic situation in the country.

Describing the governance of the incumbent administration as “a tragedy” John Mahama said “we have a government completely unwilling to acknowledge the problems and even begin the processes to address them.”

He noted that instead, the government assumes the issues can be “wished-away through sloganeering, public relations, populism, divisive rhetoric, and plain political deception.”

Speaking at a public lecture to climax his ‘Thank You’ tour on Wednesday, the former President observed that these actions and inactions of the government have been detrimental to the country’s development.

“The most pressing problem is the impact of the ailing economy on livelihoods, prospects and dreams. The consequences of misguided priorities in economic management have led to unbearable hardship, high unemployment and the frustration and despair felt by millions of the youth.

“The others include the bastardisation and politicisation of state institutions. The mounting corruption, rising insecurity, abuse of power, lack of investment in critical infrastructure and abandonment of projects and heavy-handed governance,” he enumerated.

The “spirited linguistic acrobatic” attitude of the ruling party, Mr Mahama claimed, is what has pushed the country into its current economic crisis.

According to the former President, “these are people that six years ago, were dismissing any linkage between the welfare of Ghanaians and any economic indices. They said then, that they have visited the market and were not experiencing single digit inflation prices in those markets as we were dictating.”

He stressed that instead of government being dismissive of concerns raised by the populace, it should learn to heed to such calls to foster the healthy growth of the country.