Persons with Albinism in Ghana say they are living in fear as the December 7 Presidential and Parliamentary elections draw nearer.

According to the albinos, their safety is not guaranteed in many areas of the country where primitive customs and beliefs make people tend to perform rituals with the blood of an Albino for power.

“The fear is that as we know they have been using parts of our bodies for rituals so maybe somebody will want to come to power and that is their beliefs that if they use our parts of bodies they may win power. So sometimes some of us the fear is there during election time so when you are going out you wish to go and come back early so that you don’t go and meet somebody who will kill and use you for rituals”.

“As for me during election time my brothers tell me to stay home so that nobody kills me for sacrifice so it creates anxiety anytime I go out,” Some persons with albinism lamented.

Newton Komla Katseku, the National Director of Ghana Association of Persons with Albinism (GAPA) said it is undeniable fact that albinos are sacrificed for rituals during major elections hence calls on the security agencies to pay much attention to security of persons with Albinism in the country.

“You cannot separate Political power from ritualism. The presentation that I have done indicates there are reports that suggest that persons with albinism have been used for sacrifices in quest of power from 2008 election till date in Ghana. And it is happening physically in some of the neighbouring countries in Africa.

“It is something that we need to guard against. Properly, what we need to do is to hold political stakeholder engagement so that we explain to them if you take the life of somebody for power whom are you going to rule in future. So persons with Albinism will continue to cry and call for protection before, during and after the election” Newton Komla Katseku told Starr News.

Meanwhile, the Ghana Association of Persons with Albinism on Tuesday, June 16, 2020 held dialogue meeting with some selected fetish priests, traditionalists, Chiefs as well as representative of CHRAJ and Amnesty International to create awareness and reduce superstitious beliefs which project physique of persons with Albinism as good omen for ritual purposes.

The association listed a number of communities such as Kwahu Bokuruwa, Akwamufie, Abease, Larteh, Awukugua in the Eastern Region, and Kane in Upper West Region as known Communities notorious for customs of banishment and attacks on albinos hence calling for reforms to guarantee the safety of persons with albinism.

Robert Akoto Amoafo, Country Director of Amnesty International, said it is time Ghana takes the necessary interventions to end all forms of abuse against persons with albinism to improve the country’s human rights credibility.

“Our own constitution say we should not discriminate against people. It will help us increase our credibility as a country looking at what we are doing to protect the vulnerable.

“We are going to continue to work with the association to educate people to know that persons with albinism are not strange people. They are human beings as any other person, and our constitution says the rights of all persons as supposed to be respected.

“But until that albinos in Ghana continue to suffer discrimination, stigmatization and human right abuses with some being denied by families opportunity to marry their relatives” 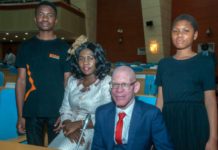