Hundreds of citizens have hit the streets of Accra in a peaceful march to petition the Ministry of Gender, Children and Social Protection over rising inequalities.

The move, dubbed “The March for Equality”, was organised by the coalition of Ghana Civil Society, (CSO’s) on the Sustainable Development Goals to tackle the menace.

The CSOs brought together street children, famished Ghanaians and physically challenged persons to call for better social interventions to alleviate extreme poverty and better the plight of the disadvantaged in society.

State Director for SEND Ghana, George Osei Bimpeh, who spoke to Joy News said that the petition, signed by hundreds of citizens, includes how disparities in terms of infrastructure and access to public service could be addressed.

He explained the move was an attempt to close the gap society has created between the haves and have-nots by paying attention to underprivileged people in the country.

Acting Director General of Administration at the Ministry, Thelma Ohene Asiamah, who received the petition on behalf of Minister Cynthia Morrison (away on assignment) assured the group that the document will be given the necessary consideration. 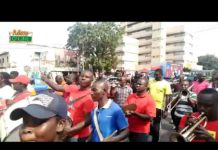 FGM resurfaces in Upper East as prevalence soars to 27%