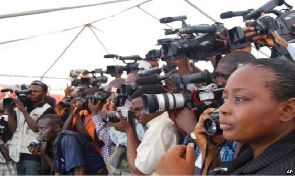 The Convention People’s Party (CPP) has called on journalists never to surrender to the threats and intimidation of people in government in their quest to expose the ills in the society.

The party said journalists and their media houses would do a great disservice to Ghana if they preferred to stay silent on state officials who would stop at nothing to cow everyone into submission.

“We need quality journalism to partner the government in its effort to move Ghana beyond aid as revolutionary journalism formed part of the team of fighters to secure us our independence,” a statement from the CPP to mark this year’s World Press Freedom Day said.

The statement was signed by the acting General Secretary of the party, Mr James Kwabena Bomfeh Jnr.

The statement also emphasised the need for practitioners to learn the rules governing their calling and practice, indicating that the power of the press to do good was great but the power to do evil was even greater and immense.

For the journalism profession to attain its deserved height, it said journalists must be above the “vague and unrealistic claim of neutrality”.

It said journalists must see “what is right or wrong, just or unjust and make the effort to take sides with the good”.

Regarding the conduct of journalists, the statement stressed the need for proper regulation of the conduct of practitioners and added that “humankind by nature may stray even in the noblest of thoughts if unchecked”.

“We expect to see the National Media Commission become an authority with more power to bite and restrain erring journalists. The press should not be allowed to hide under the cover of press freedom to cause irreparable damage to the dignity of innocent citizens,” it added.