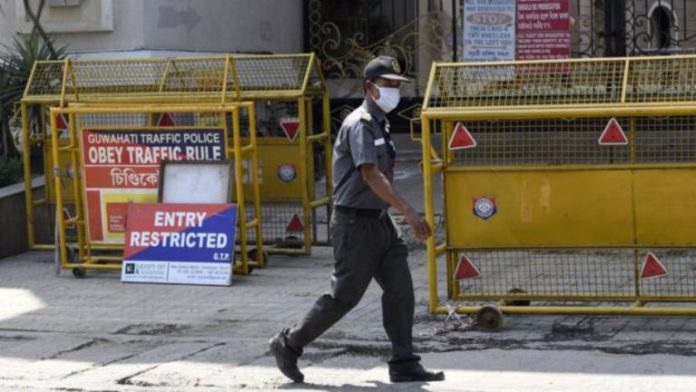 India has quarantined tens of thousands of people in their homes. But some of the measures designed to keep them inside – like the signs posted outside their houses and releasing their personal data – have led to unintended, and unpleasant, consequences. The BBC’s Vikas Pandey reports.

Bharat Dhingra’s family of six have been in “home quarantine” in India’s capital, Delhi, since his brother and sister-in-law returned from the US on 22 March.

Neither have displayed any symptoms, but the entire family followed government advice and self-quarantined.

Then officials posted a sticker outside their houses that read: “Do not visit. Home under quarantine.”

It was supposed to ensure people abide by the rules. But for people like Mr Dhingra – who was already diligently following the rules – the sign has caused “stress and psychological pressure.”

“Our house has become like a zoo,” he told the BBC. “People stop to take pictures when they pass by. Our neighbours tell us to go inside even when we step out into our balcony for a minute.

“We also understand that the houses that are in quarantine need to be marked for awareness,” he acknowledged. “Government officials have been very nice to us, but it’s the attitude of some people that hurts.

“Some people shared the picture of our house in local WhatsApp groups as a warning.”

“People need to realise that home quarantine is a precautionary measure – it doesn’t mean we are infected, but let’s say even if we are, we don’t need to be ostracised for it.”

The BBC spoke to several people across the country who have had similar experiences.

One couple, who did not wish to be identified, said that their home in Noida – a suburb of Delhi – had become “a place of horror for many”.

“We went into home quarantine straight after coming back from abroad as a precautionary measure. Little did we realise that we will be completely shunned by the community.”

What they’d like is just some words of encouragement on the phone or a text message.

“But everybody looks at us with suspicion – even when we are on our balcony. It’s in their eyes.

“We’re not meeting anybody. It’s really sad that we are being treated like this.”

Kuljeet Singh also faced similar issues when he was told to quarantine himself at his home in Farrukhabad district, in the northern state of Uttar Pradesh.

He had met Bollywood singer Kanika Kapoor, who later tested positive, at a party.

“The case was discussed endlessly in the media and that put so much pressure on my family,” he said. “All kinds of rumours started spreading. Some said I was vomiting blood and will die in a few days.”

Mr Singh said that “people are scared and they believe any rumour on social media”.

His quarantine period has now ended but, he says, the stigma will take a long time to go.

“Even vegetable and milk vendors refuse to come to deliver to our house.”

Number of jobs lost in Ghana through coronavirus pandemic [Listen]