The legislator said the so-called remedy should not be despised, despite warnings by the World Health Organisation (WHO) against untested treatments.

“Things from Africa are often despised but I believe strongly that we must pay attention,” Mr Ablakwa said on Ekosii Sen on Asempa FM, Tuesday.

Madagascar’s President Andry Rajoelina launched CovidOrganics, a product based on the artemisia plant last month when it had been tested on fewer than 20 people.

After conducting internal tests on the herbal remedy, the product was released onto the market to fight the Covid-19 pandemic.

Nonetheless, the WHO raised concerns against the product.

Mr Ablakwa, however, believes that the product could be a cure for the virus because it is already producing results on persons who have tried it.

He also commended the African Union (AU) for requesting for the details and support for the product.

Mr Ablakwa believes that the decision by the AU is laudable, and urged the union to further investigate and promote the product if positive results are yielded.

“Let’s allow it to go through the motion, the testing and all that but let’s not despise it. Herbal medicine has been with us all along and who says that medication should be always come from the West?

“Who knows, the vaccine may just come from Africa because there is a pharmaceutical conglomerate that always wants the vaccine to always come from them; from the West so that they can just hijack it and profit from it and leave the poor countries out,” he said.

He also called on the media to start an advocacy to support the product and commended African countries who have already started using the product, especially Madagascar for “showing the way” and ignoring all criticisms against the product.

“This is no poison, it is producing results. Nobody is dying and I think that it must be supported,” he said. 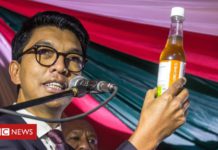