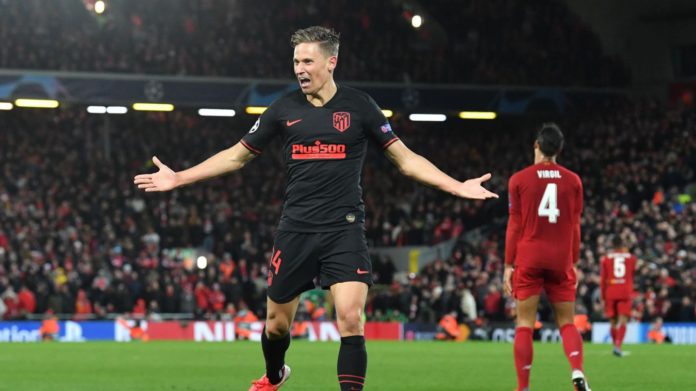 An extra-time double from Marcos Llorente stunned holders Liverpool and earned Atletico Madrid a 3-2 win at Anfield to seal a 4-2 aggregate success and secure a spot in the Champions League last eight.

Having initially struggled to break down the typically resolute Atletico, last season’s semi-final hero Georginio Wijnaldum arrived right on cue to head Liverpool into the lead a minute before the interval and restore parity in the tie.

Liverpool had plenty of chances to win it in normal time but found goalkeeper Jan Oblak in inspired form before Roberto Firmino did finally break the visitors’ resistance with his first home goal and Champions League strike of the season in the first period of extra time.

Just 167 second later, though, the tie swung in Atletico’s favour as substitute Marcos Llorente capitalised on an error from Liverpool stand-in goalkeeper Adrian to score that crucial away goal, before he and Alvaro Morata added goals at the end of each extra-time period to ensure Diego Simeone once again worked his magic in a European knockout tie to end Liverpool’s hopes of a league and European Cup double.

With Diego Costa back in the Atletico line up, the perennial pantomime villain almost had an immediate impact, finding the side-netting in the first minute of the match. Liverpool, who welcomed Jordan Henderson back into the side, but were without first-choice goalkeeper Alisson, settled and kept plugging away with accurate cross after cross causing plenty of problems for the visitors.

The opener came, true to form, from a cross, as Alex Oxlade-Chamberlain clipped a centre onto the head Wijnaldum who headed down into the ground and in to send Anfield into delirium.

Costa was replaced early in the second half by Llorente, much to the former Chelsea striker’s frustration, kicking the medical bag as he made his way to the bench. Simeone had to do something, though.

Chances came and went in normal time, but Firmino sent Anfield into delirium after his header had come out off the post before converting the rebound. Yet, as Oblak was excelling down the other end, the previously inactive Adrian gifted Atleti a chance to get back into it as his poor clearance found Joao Felix who fed Llorente before the former Real Madrid man scored his first-ever Champions League goal.

Lorente’s second was more his own work, rifling a fine strike into the bottom corner before Morata raced clear with Liverpool chasing the game late on to spark jubilant scenes on the Atleti bench, Simeone, of course at the forefront of everything.