Chief Justice nominee, Anin Yeboah has announced plans to resign as the Chairman of FIFA’s Disciplinary Committee if cleared to occupy the highest office of Ghana’s legal practice.

Justice Anin Yeboah was elected as the Chairman of Committee at the 67th FIFA Congress in Bahrain in May 2017.

Justice Anin Yeboah disclosed his decision to resign when he was asked whether he will still keep his position at FIFA as Chairman of the Disciplinary Committee when he appeared before the Appointments Committee of Parliament on Monday.

“If you clear me and I become the Chief Justice, I will resign my position from Fifa,” he said.

Justice Anin-Yeboah was endorsed Chairman of the Disciplinary Committee after he polled 98% of total votes cast at the FIFA congress.

Anin Yeboah has also served in the Confederation of African Football (CAF) and the Ghana Football Association (GFA).

This is why Inusah Fuseini is quitting Parliament after 16 years 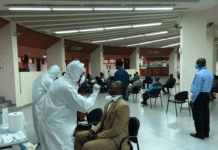