Two late strikes from Edinson Cavani and Anthony Martial gave Manchester United a 2-0 win over Everton to book their place in the semi-finals of the Carabao Cup.

Despite making nine changes United stormed out of the blocks, helped by some early Christmas presents from the Toffees’ defence.

They should have been ahead with Mason Greenwood hitting the post and Cavani and Donny Van De Beek going close.

Carlo Ancelotti’s side were sloppy in possession and lethargic in the early stages but improved as the half wore on with Gylfi Sigurdsson’s free-kick forcing Dean Henderson into a fine save.

The Toffees were dealt a blow early in the second half when Richarlison was forced off after being sandwiched between Bruno Fernandes and Eric Bailly when challenging for a header.

The second half was a tetchy and disjointed affair but Cavani, who was lucky to escape a card after a coming together with Yerry Mina, stole the show with a stunning curling shot from the edge of the box.

And substitute Anthony Martial, who set up the opener, netted from a counter-attack with the last kick of the game to seal victory. 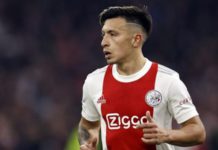