With a few days more for the Beach Soccer Afcon Qualifier, the 22 players at the disposal of Coach Kotey have been pruned down to his final 15 for the July 23rd first leg in Accra.

Alexander Adjei, one of the longest-serving Ghana Black Sharks players has fired a warning to the North Africans.

He said “Yes Egypt are favorites because they are ranked higher than Ghana, they are the top team in North Africa and one of the leading Arab nations when it comes to beach soccer – so we respect them. But that’s all. We don’t fear Egypt.”

Alexander Adjei who is aiming for his third Afcon qualification ticket after Seychelles and Nigeria believes that the long absence of the Black Sharks from international action has made the players hungrier and more determined as underdogs.

“Immediately the draw was announced, I told the boys that we have nothing to lose against the Sand Pharaohs of Egypt because everybody expects them to qualify so we have to prove the experts wrong and play our best game ever”.

Adjei is the reigning Afcon Beach Soccer Goal King with 17 goals in a single tournament. A feat he achieved in Seychelles over five years ago.

Asked if he’s surprised that no player has equaled his goal-scoring master class, Adjei simply replied with a grin that one day the record will surely be broken.

“Maybe when we qualify to Mozambique I can break my record.”

Chairman of the Ghana Beach Soccer Committee, Mr. Yew Amofo Ankrah is also optimistic that the Black Sharks will deliver. 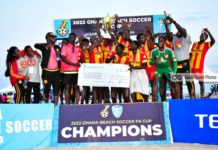