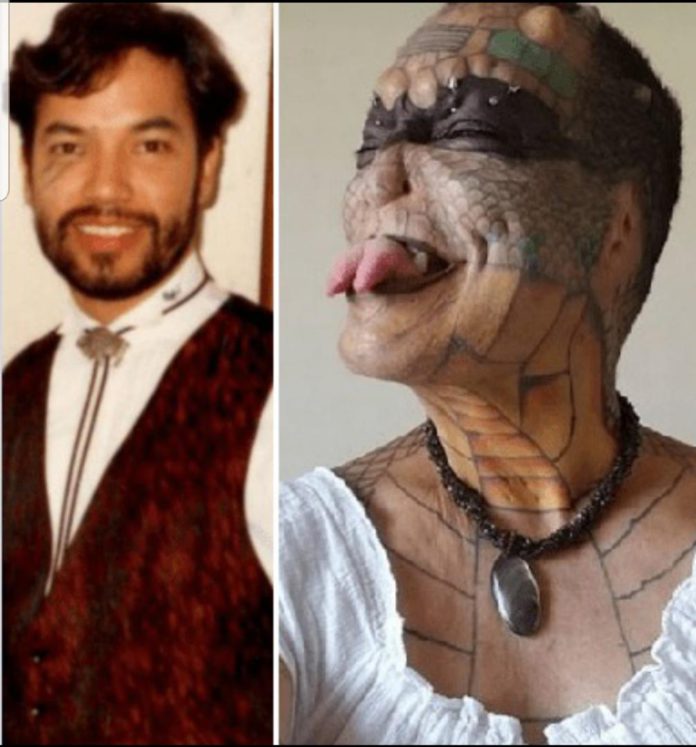 A former bank manager, who has spent thousands of Pounds on body modifications, now plans to cut off his penis.

Richard Hernandez, a Los Angeles resident, decided to change his path in life and transitioned from banking to become a “dragon lady” called Tiamat Legion Medusa.

The American spent £61,000 on an extreme makeover that’s consisted of ear removal and tongue splitting surgery and now wants to cut off his penis.

Tiamat has had 18 horns implanted, as well as partial nose removal. Getting tattooed, pulling six teeth, and getting the whites of their eyes stained green are also part of the procedures Tiamat has undergone.

After transitioning from male to female, Tiamat’s breasts grew as a result of hormone therapy, but now, they’ve decided they’d rather be genderless.

Tiamat said: “I am in the process of going genderless, so I prefer they, them pronouns. Top of my priorities is to say goodbye to Mr. Bojangles, my penis, as soon as possible.

“My ultimate preference is to simply be called an ‘it’, just like my own kind, the snakes.

“My metamorphosis is nowhere near done.”

Tiamat was abandoned in the woods as a child. This made the “dragon lady” denounce their birth parents in favour of a snake.

The dragon lady recalled: “I was abandoned by my parents in the middle of the woods, at night, deep in the heart of South Texas, where the Western Diamondback Rattlesnake abounds.

“It was then, when my human parents shoved me out of the car to leave me there like unwanted trash that I adopted the venomous rattler as my parents.

“They left me and two of my other three siblings close enough to the family farm so that my maternal grandparents would find us.”

After coming out as gay aged 11, Tiamat became a target for bullying.

After leaving high school in 1979, the graduate started to pursue a career in banking.

Tiamat said: “Through my 15-year tenure, I rose to become a banking vice president and client manager in the bank’s Corporate Banking Division where I managed a diverse portfolio of corporate clients for the bank including on of the bank’s top ten clients.”