Irate residents of Awoshie and its environs on Tuesday took to the streets to protest over faulty traffic lights in the area.

This follows reports of incessant deaths on the route due to the malfunctioning of traffic and streetlights coupled with the absence of footbridges.

A tragic knockdown on Tuesday morning is said to have sparked the riots following similar incidents on Sunday.

The residents lamented not less than two people are knocked down on the road within three-days every week.

They expressed shock about how those in charge have turned blind eyes despite the unfortunate happenings.

Police and military personnel were deployed to the area to control the residents but they wouldn’t just give up even when warning shots were fired.

Meanwhile, the Ga Central Municipal Chief Executive Officer, Emmanuel Lamptey, in an interview on Adom FM’s Dwaso Nsem attributed the situation to traffic and streetlight cables on the Anyaa to Ablekuma Fan Milk road which have been stolen. 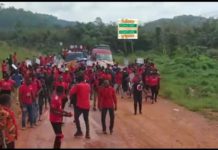