One person has been reported dead in a fire outbreak at Konongo Kwakrom in the Asante Akyem Central Municipality in the Ashanti region Saturday morning.

Information gathered by Adom News suggests the deceased identified as Francis Kodua was trapped in his room during the outbreak.

Speaking in an interview with Adom News, an eye witness, Kwaku Amoako said the fire service could not save the situation due to the deplorable roads which delayed their arrival.

“We managed to control the fire but we could not rescue Francis but it seems this community has been neglected by government and we will use this opportunity to appeal for support” he said.

ALSO: No vigilante group is being trained at Asutsuare – National Security Council

The Konongo-Odumase Divisional Fire Commander, Emmanuel Richard Mensah who described the incident as unfortunate stated their efforts to save the situation proved futile.

“We received the call around 4:47am about the outbreak so we set off but couldn’t get any accessible route to the scene with our car breaking down which we had to tow with a rope to the scene but it was unfortunate he was burnt completely on our arrival,” he said.

ALSO: I was nearly buried alive after handing over power to Limann – Rawlings

Meanwhile, he assured investigations are underway to establish cause of the fire. 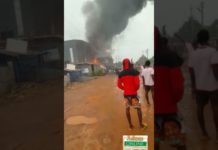