The embattled founder and Chief Executive Officer of defunct Capital Bank, William Ato Essien, has taken his fight to the Supreme Court seeking to temporarily halt his trial pending the determination of his appeal.

His lawyer has filed an appeal against the decision of the High Court to admit an audio recording of a confrontation between the accused and the Special Investigative Team into evidence, arguing that that admission of the tape will be injurious to his case.

He tried to convince the court to stay its hands while the Court of Appeal determines the matter, but the application moved by Baffour Gyau Bonsu Ashia, counsel for the accused, was dismissed by the court presided over by Justice Eric Kyei Baffour, a Court of Appeal judge sitting as an additional High Court Judge.

The court last Thursday dismissed an application filed by his lawyer to stay proceedings pending the determination of his appeal against the court admitting an audio recording into evidence.

The court on June 9, 2022, admitted into evidence an audio recording which captured a confrontation between Ato Essien and the Special Investigations Team during his interrogation as part of investigations.

The audio was tended by Rev. Fitzgerald Odonkor, one of the two persons standing trial alongside Ato Essien for allegedly stealing from the GH¢620 million given to the defunct bank by the Bank of Ghana as liquidity support.

Mr. Ashia argued that the motion raises serious legal issues to be determined at the appellate court, adding that it also raised special circumstances to warrant a grant of the application to stay the trial pending the determination of the appeal.

Justice Kyei Baffour, in his ruling held that “the content shows that he was cautioned before he spoke, and that he spoke in the presence of a lawyer and a state attorney. The claim that the interlocutory appeal raises serious issues of law cannot be correct. I dismiss the application as totally without merit.” 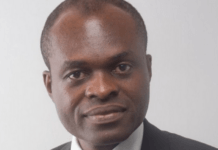