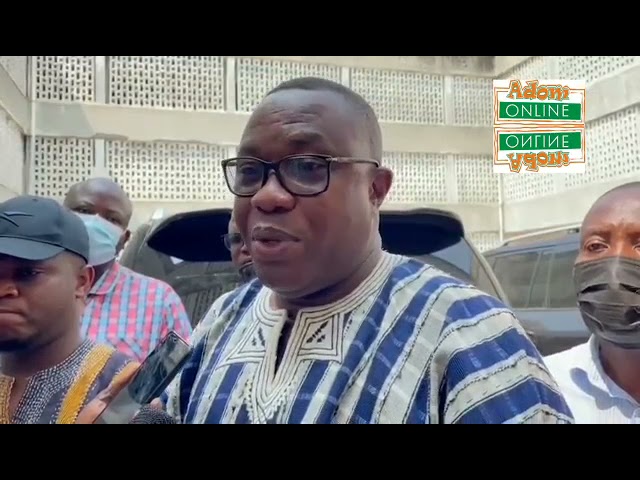 The leadership of the National Democratic Congress (NDC) on Monday, August 2, met the Assin Bereku Traditional Council to petition the traditional leaders over the recent judgment of the Cape Coast High Court regarding last year’s parliamentary elections.

Justice Boakye, last Wednesday, ruled that the Member of Parliament for Assin North Constituency, James Gyakye Quayson, possessed dual citizenship of Canada and Ghana prior to filing his nomination to contest the 2020 Parliamentary Elections.

His judgment, therefore, annulled the results of the elections, demanding the Electoral Commission to hold fresh elections to get the MP’s replacement.

The NDC has not been happy with the judgment, citing errors in it and bias on the part of court officials.

The party, on Monday, filed an appeal against the judgment.

It was after this notice of appeal was filed that the leadership, joined by the beleaguered MP, paid a courtesy call on the chiefs at the Assin Bereku palace.

Mr Quayson assured the chiefs that he will not relent in his effort to make Assin North a model constituency in Ghana.

He said the development of the constituency and the welfare of the people, neglected by successive MPs, is what motivated him to come back home to be their representative in Parliament.

He said he could have stayed in Canada for selfish reasons but decided to come and improve the standard of living for the people of Assin North, who have been neglected for a long time now.

Mr Quayson said he has not done anything untoward to be disqualified from contesting elections in Ghana.

“I respect the law, I am still your Member of Parliament,” he said.

NDC’s National Chairman, Mr Ofosu-Ampofo, said the chiefs should support the party in ensuring that the decision by the High Court is overturned for Mr Quayson to continue serving the people in selflessness.