According to him, the majority of the people who use MoMo are the non-banking public like the market women and head potters [kayayei] who are already feeling the impact of the government’s ‘economic mismanagement.’

The Finance Minister announced the introduction of an Electronic Transaction Levy, also known as an E-Levy, to increase tax revenue for the country.

“The government will charge an applicable rate of 1.75% on all electronic transactions covering mobile money payments, bank transfers, merchant payments, and inward remittances, which shall be borne by the sender except inward remittances, which will be borne by the recipient,” Ken Ofori-Atta announced this while presenting the 2022 Budget Statement and Economic Policy to Parliament on Wednesday, November 17, 2021.

This has generated a lot of controversy with many arguing that it will affect the government’s drive for a cashless society.

He explained that Ghanaians would be compelled to carry out transactions using physical cash.

“How do you tax the kayaye and a rich man living at East Legon the same? This government just wants people to suffer,” he bemoaned.

General Mosquito, as he is popularly known, said all these taxes will not be used to improve the lives of Ghanaians but rather fund the expensive life of President Nana Akufo-Addo. 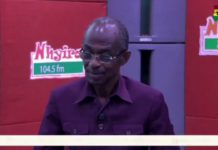